The staff at the BRWA are a dedicated team, all bringing their talents and passions to the table to make our work come alive. We have been lucky to have the same core team over the last 7 years, with the addition of summer staff.

David Samm is the Battle River Watershed Alliance’s General Manager. He started with BRWA in 2007 and continues to coordinate the work of the Alliance and to oversee the BRWA’s long-term strategic plan. David is a graduate of both the University of Manitoba (BSc in Agriculture) and Saint Francis Xavier University (Masters Degree in Adult Education).

Prior to joining BRWA David worked as a consulting agrologist and has over 30 years of experience working with the agriculture industry in central and northern Alberta. He is passionate about helping people and enjoys creating new projects that focus on making the world a better place for people.

David also enjoys being involved with volunteer work for programs that strengthen the social, economic and ecological fabric in Camrose and area. Currently he is a director on The Bethany Group (TBG)’s Governing Board.  He also reading Dr. Seuss books to grandchildren, playing the Great Highland Bagpipe and a has renewed interest in running.

Sheila has been with the Alliance since 2009.  She provides internal administrative support and records management, employee benefits and attends to the Alliance’s day-to-day office needs. She also supports the BRWA Board of Directors as the recording secretary and manages their meeting logistics. She is often behind the scenes at our events, helping to plan food and logistics. Originally from the Southern Alberta, Sheila grew up on an irrigation farm and maintains strong ties to that area and agriculture. Outside of work, she dedicates her time to supporting to two active sons who enjoy competitive hockey and baseball.

Susanna has worked with the BRWA since 2012 in various roles. She is a Bachelor of Science graduate from the Biology program at Augustana University College (now U of A, Augustana Campus), and has a Master’s in Environmental Education and Communication from Royal Roads University. Her thesis examined how media communicates about drought and climate change, and how these frames affect landowners’ mitigation and adaptation strategies.

Raised in the watershed, Susanna’s passion for understanding the natural world and people’s connection to it has taken her across Alberta and around the world. She seeks to learn how the land and cultural values shape personal worldviews and society. She currently lives with her family, dog, and rabbits, overlooking the Battle River.

Nathalie has been leading our youth education and community outreach projects since 2011.  She graduated from Royal Roads University in 2018 with a MA in Environmental Education and Communication. She combined her loves of maps, art, and place to design the “Make Your Map” workshops, encouraging people to create personal maps of their special places in the Battle River region.

Nathalie has loved water everyplace she has lived across Canada- from the Gulf of St. Lawrence, to Ontario’s lakes, to the ephemeral stream which flows across her family’s farm. She loves to take her rubber boots through puddles in the spring and ski or skate across the snow and ice in the winter.

Sarah has been the BRWA’s Watershed Planning Coordinator since 2010. This work includes sharing information on the health of the watershed and collaborating with residents, stakeholders and decision-makers to develop and implement watershed management plans, programs, and practices that support improved watershed health.

Originally from Turtleford, SK, Sarah moved to Camrose, AB, in 2005 to study at the U of A, Augustana campus, where she earned a Bachelor of Arts degree in Environmental Studies. In her work and in her life, Sarah desires to work together with individuals, organizations, and communities to care for the long-term health and wellbeing of land, water, and people. Sarah is a beautiful singer and musician, and a coffee and tea connoisseur.

Mackenzie is the latest addition to the BRWA team, starting as the Education Intern in the spring of 2019. She is a recent graduate from the Integrated Resource Management diploma program at Saskatchewan Polytechnic in Prince Albert, SK., and is now pursuing part-time studies in early childhood education. Mackenzie has a background in wildlife education and a passion for sharing the wonders of our natural flora and fauna with others.

Mackenzie grew up in a small Metis community on a lake in northern Saskatchewan with the boreal forest in her backyard. After moving to Maidstone, “the town between two rivers,” (the Battle and North Saskatchewan Rivers) with her family in her youth, she grew a deep appreciation for the prairies and parkland and made the choice to devote her career to protecting it. Mackenzie now is enjoying small-town living just outside of Camrose with her 3 cats. 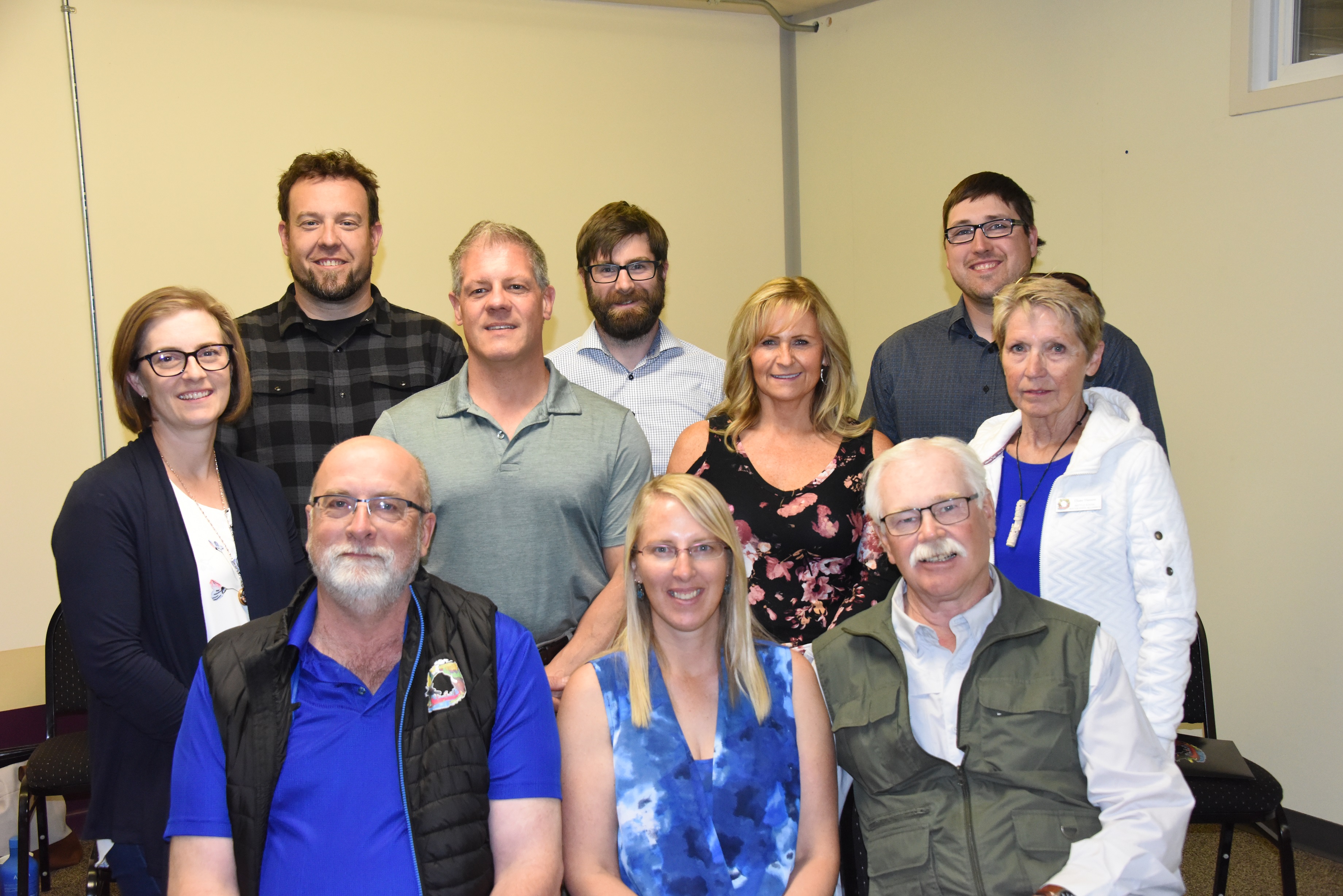 Greg grew up in Cole Harbour, Nova Scotia, but is currently putting down roots in Camrose. He completed his B.Sc. in Environmental Science and an M.Sc. in Geography at Carleton University, establishing a love for northern forest ecology which lead him to complete his Ph.D. on tree growth dynamics in Switzerland. He has taught at Mount Allison University in New Brunswick, and Queen‘s University in Ontario. In January 2018 he started as an Assistant Professor of Environmental Science at University of Alberta – Augustana campus. He continues his research of northern climates and vegetation, recently completing a 5 week canoe -based field expedition in the arctic, and more locally, studying the growth and health of Camrose’s urban forest.

Outside of his teaching and research work, you might find Greg with his partner and son in the backyard garden, or getting active on the ski trails, paddling a river, or playing ultimate frisbee.

Khalil’s key research interests are sustainable agriculture and protecting the environment. He has more than eight years of research experience and holds a PhD in Agriculture and a Diploma in Environmental Sciences from NAIT.  Khalil previously worked with SARDA Ag Research as an Environmental Coordinator and then Research Coordinator, often partnering with the Mighty Peace Watershed Alliance. He has also worked in the fertilizer industry in Pakistan, at the Agricultural Institute of Malaysia and at Integrated Crop Research Management Services in Fort-Saskatchewan.

Apart from work he enjoys time with his family, playing cricket and tennis, and watching documentaries and DIY home repair videos on YouTube.

Barb has been with ATCO Power for 20 years and currently is the Laboratory and Environmental Supervisor at the Battle River Generating Station.  She has been involved in the development of many environmental programs at the site over her time there.

Barb has a diploma in Conservation and Reclamation and a Bachelor Degree of Applied Integrated Environmental Management.  She has been involved with the BRWA even prior to its inception.   Barb has been a BRWA director for many years and has previously held the treasurer position.

Barb was born and raised in the Forestburg area, and now lives near Donalda on a farm with her family.  She is involved with community and kids activities including 4H, minor hockey, agricultural societies, and most activities her kids are involved in.  She loves the outdoors and enjoys spending time hiking, canoeing, and camping in the Battle River Watershed, and all parts of the province.

Lorne joined the Camrose Police Service in 1969 and after a successful career retired in 1996. He then spent three seasons as a Park Ranger at Miquelon Lake PP and the next eight years working in the Oil Field Service Industry.   Lorne has been a member of Ducks Unlimited for over thirty years acting as Committee Chairman for the Camrose Committee as well for the  Ducks Unlimited New Norway Golf Tournament.  He also was responsible for the Alberta Ducks Unlimited Art Program for eight years and served 7 years as the president of the Friends of Little Beaver Lake Society.

He and his wife Laurie have two grown children. He likes to spend time in the badlands looking for artifacts, fly fishing and hiking, with his two grandchildren.

Diane grew up on a mixed farm north of Viking AB. She feels fortunate to be from a family who respected the interdependence of land, water and humans. She studied agricultural internationally prior to a 20 year career working in adult education and in the natural gas industry.

She is currently working at the Viking Farm – a bio-intensive /organic venture producing fruits, vegetables and grass fed poultry and beef.  She is pleased to be part of BRWA and hopes to make a positive difference in our watershed!

We’re now taking nominations for this position. Contact us for more information.

Growing up in Consort, Midge is very familiar with our watersheds. She had spent a number of years stewarding a section of land on the Battle River near Kelsey, but now resides in Camrose.  Midge enjoyed an active career catering and cooking, working across western Canada from movie sets to forestry camps.  She still loves to cook and has been one of the amazing chefs during the Rolling Down the River cycling tours. Midge is  passionate about local politics and rural Alberta and was the Alberta Party candidate for the  Battle River-Wainwright constituency in 2013. She continues to work with the Party and encourages everyone to get involved in their local communities.

Al currently works with the Drainage Council as their WPAC coordinator in the North Saskatchewan, Battle and Red Deer watersheds. Prior to retirement in 2010, he was the AESRD representative to the Drainage Council and the Water Operations Central-North Region manager for provincially-owned water infrastructure in the northern two-thirds of the province including Dickson Dam, two pumping stations and many other smaller projects. Al’s background includes design, construction and operation of water structures for the province over a 33 year period. Al and his wife Landy currently live in Camrose, and have four children and five grandchildren to keep them occupied. Al serves with other groups including the NSWA, the RDRWA, the Camrose Public Library Board and as treasurer for Grace church.

Corinne grew up on a mixed farm south of Consort in the Sedalia area in Special Areas #3.  She studied business at Lakeland College in Vermilion prior to her current 33+ year career with the Special Areas Board.  She started in admin and steadily moved her way up to Manager and is the Administrator for Special Areas #4 in Consort.  Corinne has always had a great interest in agriculture, native prairie and water so is pleased to be a municipal representative member on the BRWA.

Corinne and her husband Bruce farm and ranch west of Consort.  They have a daughter who is a teacher and a son who is a Journeyman Millwright working on his second ticket of Machinist.  They are proud to have them both remain and work in the Special Areas.

Melissa Orr-Langner is an Agricultural Water Engineer with Alberta Agriculture and Rural Development. She graduated from the U of S in 2003 with a degree in Agricultural and Bioresource Engineering, and has been with the department since 2006. Melissa’s role as a water specialist is to provide technical expertise to agricultural producers, non-profit groups and other organizations on the areas of water supply, quality, treatment and management. Melissa was raised on a mixed farm in the Battle River watershed near Kelsey, and has fond memories of looking for crocuses in the coulees, fishing, tobogganing and haying in the valley. She has a keen interest in assisting farmers and rural landowners protect and manage their water supplies. In her spare time, Melissa enjoys camping, playing sports and spending time with her husband and their children.

Board of Directors Portal

Learn more about the BRWA